The End of Violence

New York City-based attorney Liberty Aldrich is the director of Domestic Violence and Family Court Programs at the Center for Court Innovation, a public-private partnership between the New York State Unified Court System and the Fund for the City of New York. The Center’s work involves, in part, developing best practices to reduce domestic violence and sexual assault, and spreading those practices worldwide. Aldrich has worked at the Center for 14 years.

She visited Kolkata and New Delhi in 2013 and interacted with students, academicians, members of nongovernmental organizations and policymakers.

Excerpts from an interview.

What strategies can communities adopt to help gender-based violence survivors?

One of the biggest obstacles in domestic violence and sexual assault cases is that when people are being abused in their intimate partner relationships, it leads to a lot of isolation. The most important strategy is to make services, whether governmental or community-based, as accessible as possible to reduce this isolation. People need community services in the language they’re most comfortable with, so 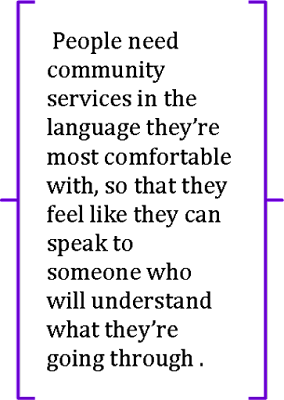 that they feel like they can speak to someone who will understand what they’re going through. Government agencies need to eliminate barriers to accessing the justice system, whether they’re economic, language or institutional barriers. Like, saying you can come get a protective order only between 9 a.m. and 1 p.m. Barriers like that make things more difficult, and the last thing you want to do is make it more difficult. Access is not just about that initial point of contact either. It’s about continuing to make it a responsive system, where people feel heard and respected.

What role can community and nonprofit organizations play in reducing gender-based violence?

The first big lesson we’ve learned is that community service providers and government and criminal justice agencies all have to partner to make meaningful change. None of them can do it alone. It’s easy to say, but hard to do.

What are some of the obstacles to such collaborations?

How can they overcome the barriers to working together?

I think, the first step is recognizing there’s a difference in goals and saying, “That’s fine.” Then, we can look at how the criminal justice system can be responsive to both the victim’s needs and the state’s goal. Recognizing these differences helps us move forward.

How can we enhance the accountability of offenders?

The primary focus of our work around offender accountability is conveying a unified message that violence is unacceptable. We are really looking for culture change on many levels, in everything from sending consistent anti-violence messages from governments, faith-based organizations, community groups and workplaces, to delivering more meaningful, enforceable sentences in the criminal context.

What did you learn on your trip to India?

I was lucky to visit New Delhi and Kolkata. I’d say, the thing that struck me most, and has stuck with me, was how much energy there was coming from young people around the issue of sexual assault. There seems to be a lot of community organizing around issues of gender-based violence, and I took back with me some great ideas about talking to men about violence, as opposed to keeping it a women’s issue. In India, I saw that a lot of young men were active in the movement to change the culture around gender-based violence. I was also impressed with India’s incredible diversity and the way folks were able to work inclusively across all these different communities.

Are there any best practices in the United States that you think could be applied to stop gender-based violence in India?

I do think the federal government’s efforts here in the U.S. to really invest in services for victims have had a huge impact. In other words, it’s not just legislation criminalizing behavior, but it’s funding support services for victims that, I think, has made the primary difference. We have had about a 50 percent reduction in gender-based violence in the U.S. since the Violence Against Women Act in 1994 and, I think, it’s because of the sustained investment in services for survivors. We still have a long way to go and numbers are always complicated, but we’ve had some really dramatic reductions, especially in domestic violence homicides. And that’s a start.

Disclaimer: This site is produced and maintained by the U.S. Embassy New Delhi. Links to other Internet sites should not be construed as endorsement of the views contained therein. The opinions expressed in the content do not necessarily reflect the views or policies of the U.S. Government.